Get fresh music recommendations delivered to your inbox every Friday.

by Hope and Social 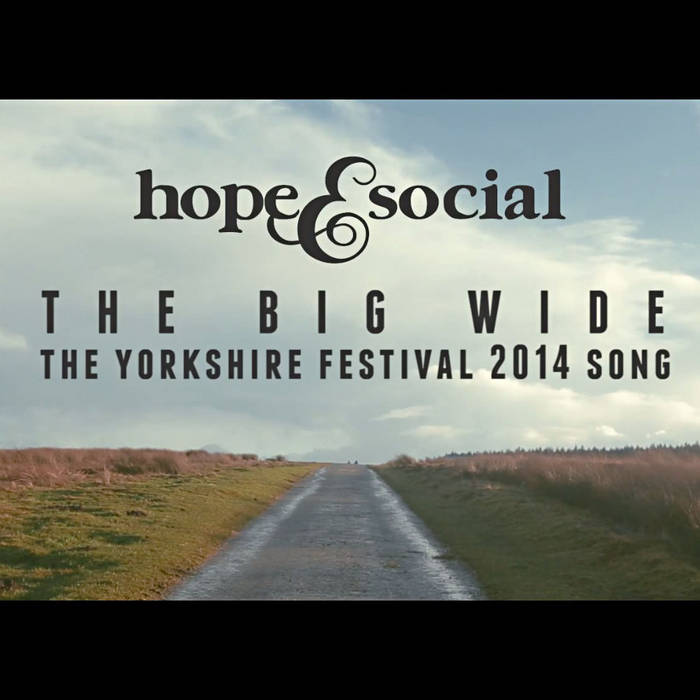 The Big Wide the anthem for the Yokshire Festival 2014. Yorkshire Festival 2014 is the cultural festival that will be running side by side with the Grand Depart (aka The Tour de France) in Yorkshire. The song will be played throughout the festival by brass bands, bicycle orchestras, childrens groups and us! Hope and Social are part of this festival with their Tour of Infinite Possibility (TIP).

The Tour of Infinite Possibility will culminate with 12 gigs in 12 towns over just 4 days in June on our custom CYCLE POWERED STAGE we're going to be trying to get 100's of people and groups along the route to join us and join our band. We'll be recruiting and teaching our new band members all through spring but we need YOU to make this happen! To find out more and get involved go to:

Come on come on and shake down those shabby bones.
We're tired and torn, creaking and cracked I know.
When did we last make some time?

Spinning with stars, dreams disregarded.
Days are all full, stuffed and congested.
When did we last make the time,
To be scared of the dark,
Where the gods and monsters hide?

Show me the way to make me a child again.
We'll be amazed by all we can't name and then,
We can at last stop to breathe,
And be scared of the dark,
Where our mind's got space to dream.

We should take a day or two,
To talk around the things we knew.
They say we can't but maybe we just can.

All of us, well we're not fools,
We know that there are simple truths,
But there's an equal opposite to that.

Maybe it's that gravity
Ain't quite the force it used to be.
The world has lost its simple grip on mass.

Or ones and zeros pile 'em high,
To reach the tallest, clearest sky,
But they won't feel the things we've felt for love.

Whenever there are two or more,
The power of a cannon roar,
When one and one are so much more than that.

Knuckle down and buckle up,
And fly right where the morning comes,
They say we can't but maybe we just can.